Located at the Wayne County Park Street Complex in Honesdale, it is a community project contributing to by a broad network of stakeholders. The training Kitchen & Café is open to the public and serves as a light breakfast and lunch café, is open Monday through Friday and allows youth and those with disabilities or others with barriers to employment the opportunity to learn pre-employment skills, receive food safety training and participate and give back to their community.

The Park Street Kitchen & Café supports local farmers by purchasing local produce and is available to cater meals for large and small group meetings or training. The Wayne County Area Agency on Aging also offers their Nutritional Meal Program there as well to those over the age of 60 working at or doing business at the Wayne County Park Street Complex.

She helped her Italian grandmother measure out the ingredients in her heirloom recipes.

A resident of Lakeville, Dawn Cole has done all this before, running an in-home/incubator-based bakery when her children were young. Not quite old enough to retire, but ready to move on from her career in banking, Cole decided to go back to what she loves – baking.

“First, I went to the (Wayne Pike) Workforce Alliance, who sent me to Mary Beth (Wood) at WEDCO, and she put me in touch with (Wayne County Chief Clerk) Vicky Botjer,” Cole explains. She then completed her certifications and permitting and began using the Kitchen at Park Street.

She shares the space with the Wayne County Area Agency on Aging staff, which provides Senior Meals and an a la carte lunch menu to the 100 or so county workers in the building and the Stourbridge Business Incubator next door.

During the week, Cole said, her shifts begin after 3 pm and on weekends she may put in 16-hour days, especially as the holidays roll around. “Last year it was just word of mouth and I was really busy, but I love it, so it’s not really work,” she explained.

During our conversation, she was rolling out sugar cookie dough and trying out a couple of different styles of train cookies for the Stourbridge Line Rail Excursions. 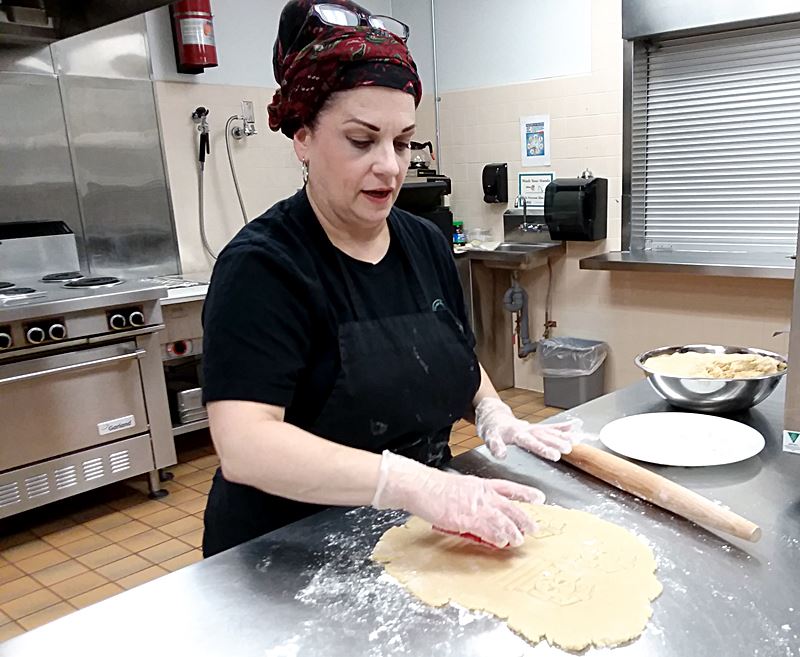 Cole said she can’t recall just how young she was when she first stood at her grandmother Milly’s elbow and learned the heirloom recipes. When she first decided to try baking as a business, Cole said she remembers saying, “Okay grandma we have to stop now so I can measure how much flour you used.” These recipes are that close to “the old days,” and it is reflected in the menu

The cookies are sold by the pound and include choices like Anisette, Sweet Chocolate Pepper Cookies, Italian Fig and Linzer cookies as well. She offers a changing array of dessert breads like Banana Nut Streusel Bread along with mini Cannoli, Pie Poppers, Cheesecakes and Milly’s Cranollies, “a crunchy cross between a croissant and doughnut with raspberry cannoli filling and topped with blush pink champagne glaze.”

The cookies may have been inspired by Grandma Milly, but Cole says it’s her daughters who inspired her cupcakes like Strawberry Moscato, Sangria and Raspberry Lemon, all made with fresh fruit and naturally flavored frostings.

But Cole hasn’t stopped there. Along with doing weddings, bridal showers, gender reveals and the like, a summer full of family weddings provided the inspiration for her latest service – NEPA Swag Bags. These have become popular with wedding couples, and at business meetings and conventions, where the bags are placed in the hotel rooms of the guests as a welcome gift.

“I watched my girls and their bridesmaids practically tearing their hair out trying to stuff all these little – and not inexpensive – gifts into the bags in the three days before the ceremony,” she said, noting she knew she could fill that niche and only worried about the price points. “They don’t blink an eye,” she said of the customers who have taken advantage of the service.

With fewer and fewer venues handling set up for caterers and other vendors, Cole also does dessert bar presentations for weddings, showers and other functions, using a collection of props she has accumulated.

With a busy holiday season under way, Cole says she is still a bit unsure about her future. “I will probably have a shop of some kind, and I know the community would love to have a full-blown bakery but I’m not there yet.” But that hasn’t stopped her from buying pieces of equipment she will one day need in the shop, as the young company’s finances allow.

Dawn Cole raves about the cooperation and support she received from Wayne County, the Wayne Economic Development Corporation and the other folks at the Park Street Complex, which has allowed her to get Milly’s Italian Pastries back up and running, and building toward the future. Cole said he expects to hire a helper in the kitchen to make her time there more efficient.